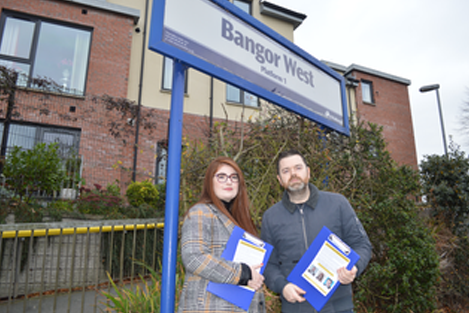 Local Alliance Party activists have unveiled a campaign set to target the on-going problem of parking in and around Bangor West Train Station.

Councillor Scott Wilson and local representative Connie Egan - who have both been revealed as Alliance candidates for the Bangor West area in next May's Local Government election - have said the problem has gone on long enough, adding they are determined to see a park and ride installed to alleviate the pressure.

Connie, who lives near the station, stated "Bangor West is my home and I regularly see the issues caused by irresponsible parking. While most people park with consideration for others, unfortunately some commuters leave their cars places where they block line of sight at junctions or make it difficult for residents to exit their driveways.

"I was shocked to hear some of the reports from those who have witnessed accidents. I can't help but feel a serious incident is inevitable unless something is done soon.

"One of the reasons I have put myself forward as a candidate for Council is to help with issues such as this. I hope our petition will show Translink the public desire is there, and adequate Park and Ride facilities are long overdue."

Scott Wilson, who has been working on this issue for a number of years now, is hoping the petition will send out a clear message to Translink that Bangor must not be overlooked.

Councillor Wilson stated, "I get contacted regularly by frustrated residents regarding problem parking and the issue seems to be getting worse. I was not surprised at the level of support for our petition when we called door to door but I was shocked by some of the stories from residents.

"People pushing prams and wheelchair users often have to walk down the middle of the road and ambulances have been unable to get past due to lack of space left by parked cars. This a serious concern and people's lives could be put at risk.

"The Department for Infrastructure have previously agreed to my requests to paint yellow lines in various places and this has helped reduce the danger in some areas. They don't however want to extend these any further so as not to inconvenience residents who want to park outside their own house. The answer then must surely be to give these commuters somewhere else to park."

"With a Park & Ride being planned for Newtownards I am extremely disappointed that Bangor seems to have been forgotten about. If you would like to help, please sign our petition at: https://bit.ly/2D75WTT"