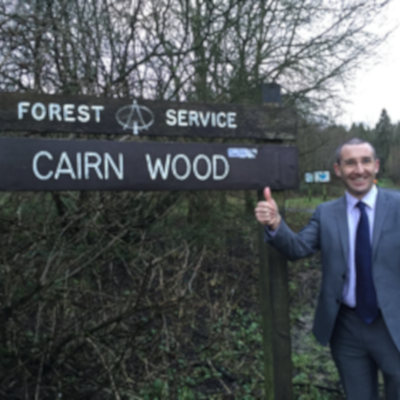 Ards and North Down Borough Council Alliance Councillor Andrew Muir has welcomed news that Cairn Wood has now transferred into public ownership with NI Water recently writing to Councillor Muir to confirm that it was transferred to the Department of Agriculture, Environment and Rural Affairs (DAERA) on 1 April 2019.

Commenting on the development, Councillor Muir said: "After a concerted campaign I am delighted to learn that Cairn Wood has now been saved with potential sale to the highest bidder no longer a possibility. The thousands who signed my petition, protested and lobbied government have delivered a secure future for Cairn Wood proving that people power delivers.

Transfer of monies from the Department of Agriculture to NI Water for the land ensures that Cairn Wood will remain in public hands for the enjoyment by future generations. I am thrilled to be informed of this news after writing to NI Water earlier in the year seeking progress on the issue with the same dogged determination I first demonstrated when I learned of plans to sell of the Forest in November 2015.

The next step to be taken is signing off the Memorandum of Understanding and Licence with Ards and North Down Borough Council to develop and operate the paths and Forest generally. I understand this work is at an advanced stage and if re-elected I intend to press hard to ensure Council concludes discussions and proceeds with work to ensure Cairn Wood is properly maintained in close consultation with users and stakeholders."